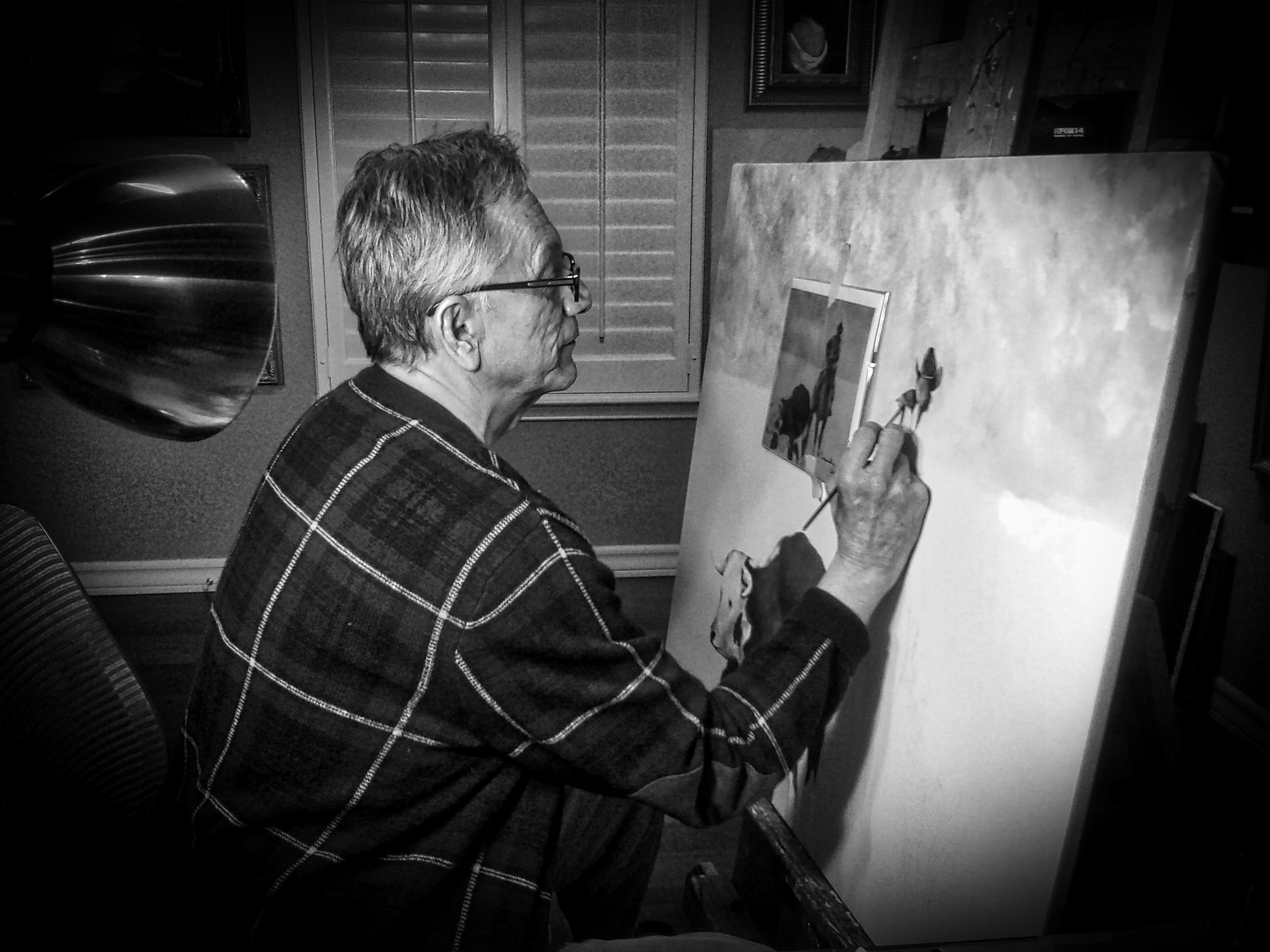 Born in Sanderson, Texas, Escamilla's early interest in art began with drawing comic book characters. Escamilla came to El Paso to Texas Western College, now known as the University of Texas at El Paso, on an invitation to try out for the basketball team. Discovering that art education was offered as a degree, he decided to take a turn for what he wanted to pursue, and thus began his life's passion.

His early works consisted of western and southwest scenes, which captured mostly earth tone colors. This type of work was not fulfilling, so he began to study in depth the works and lives of former artists. The more he read and studied the work of the "Independents", he felt a strong connection with the way they believed and painted. He continuously worked on mastering the blending of colors, brush strokes and subject matter to achieve an effect that gave the viewer a sense of beauty and tranquility. Hence, Escamilla's work entered a new dimension which strongly shows a continuation of those great painters known as the "Independents."

An award winning artist, Escamilla was inducted into the El Paso, Texas Artist Hall of Fame. A bronze plaque bust of Alberto is on permanent display in the “Hall of Fame” gallery at the International Museum of Art in El Paso, Texas. He has the distinction of winning First Place in El Paso's most prestigious juried art exhibit, Sierra Providence Arts International. One of Escamilla's collectors is renowned author Cormac McCarthy, who is known for writing "All the Pretty Horses, "No Country for Old Men", "The Road" and other books that were made into movies. A painting of Isaac Newton that Cormac commissioned Escamilla to paint hangs in the Santa Fe Institute. He was also the exclusive poster artist for the International Festival de Las Zarzuela from 1992-1999, and has been featured in the following:

The tradition in which I work evolves from a group of artists known as the "Impressionists." These artists who called themselves "The Independents" opened the door to experimentation in color. The direction in which my work has taken me involves giving primacy to color, of allowing color to evoke the form, rather than form dictating color.

My work can be best described as work continuously in progress and a continuation of the "Independents." I believe that color is life, showing the abundance of beauty of God's world. I try to project a sense of serenity and beauty on my canvas.

Monet, Sisley and Pissarro are the painters whose work I have attempted to build upon. It is their work that has laid the foundation and it is the great strength of that work that has given me the freedom to pursue their tradition.

Landscapes and beautiful gardens painted by Escamila bring out his broad use of color. As the light of the day changes, so do the colors due to the use of color and light. He usually applies the paint on his canvas by using dabs of paint rather than brush strokes.

Escamilla is known for the outstanding skies and clouds he paints in his scenes. He often observes the cloud formations during the course of his painting to capture the beautiful southwestern skies. He has captured hazy skies, storm clouds and the regular everyday cloud formations. Another very popular subject matter has been paintings of El Paso's cotton fields.

Following the versatility of the "Independents", Escamilla paints different subject matter. He paints ballerinas in the style of Degas. His favorite type of work is the hazy look which resembles Monet's later work. His versatility is further seen in the works he has done throughout the years - still life compositions, florals, portraits, seascapes, and special commissions for posters and events.

Escamilla was the official Zarzuela Festival artist during its duration. Signed Zarzuela prints and posters are available for viewing and purchase in the STORE section of this website.

The media used most often in Escamilla's paintings is oil paints.